Google I/O: Everything You Need To Know

Google I/O: Everything You Need To Know

Google I/O (Innovation In the Open) brought a lot of wonderful things and news for the world. The event kicked off on May 7 and ended on May 9, 2019, at Shoreline Amphitheatre in Mountain View, California. Google is always accused of using users’ data for streamlining ads and better functionality of its apps, but with 2019, I/O it has proved that it is more than that.

Well, the keynote is wrapped, so it’s time to talk about the slew of announcements made.

Google Pixel 3A and Pixel 3A XL Are Very Much Real

Long before Google I/O, 2019, there were rumors about Pixel 3A and after the event, they all turned out to be true. Google has launched Pixel 3A and 3A XL with headphone jacks at a cheaper price. The price starts at $399. The reason behind launching a cheaper model is that Google wants to bring helpful smartphone experience to more people. The mighty Pixel comes with advanced camera features along with Super Res Zoom, Night Sight, and portrait mode on both front and rear facing shooters.

The question is what we are missing with the lower price-

The Pixel 3A misses out Waterproofing and wireless charging. However, it comes free Google Photos storage on the cloud, but the image quality would be limited to high quality instead of full resolution.

The new Pixel would be available in three colors- white, black, and purple. They would come with major carriers like Verizon, T-Mobile, and Sprint and is available in 13 other countries

Android Q Beta was only available for Pixel devices so far, however with the announcements at Google I/O, it will now be available to 21 devices. Beta version also comes with Dark Theme for every standard Android app. This feature was available on the earlier beta version; however, we weren’t able to activate or disable it.

So, users can turn it on manually or just by opting for battery saver mode. Till now apps were used to reduce the distraction of social media and internet while working, now Google has taken an initiative to help you concentrate, with new Focus Mode.  Focus Mode enables you to select specific apps which you want to avoid during a time and disable the notifications to relieve you.

Also, soon parents could now be able to link their account with kids to limit their app usage and can monitor their kids’ online activity.

With Android Q Smart Reply will also be introduced for third-party messaging apps and it will also offer actions such as launching Google Maps if they see a message about address or commutes.

Android Will Soon Offer Live Subtitles On All Videos

Another wonderful feature will be added, Live Caption to all videos. Whenever you will watch a video, no matter where the video is, it could be on web, app or camera roll, Google will soon add subtitles to the video. Isn’t it amazing? People who are not familiar with the particular language spoken in the video would be able to understand what the video is about. This will be very beneficial for people with disabilities. However, this could turn out to be an irritating addon, if the Captions are not apt.

Live Caption will be added to phone calls, which will help people who may be hard of hearing understand what you said.

With Android Q, Google is also introducing Project Mainline. Google will now start releasing software updates directly via Play Store rather waiting on phone manufacturers. Now the new system of updates will come in modules that assist in handling particular parts such as “media components” for camera bugs of a device.

Stadia offers the triple-A game streaming potential to all provided with internet access and Chrome web browser. It is compatible with Chrome and Chromecast Ultra on laptops, desktops, phones & tablets.

One of the significant features is accessibility, you can easily switch from one device to another in a few seconds, so gamers can take their games wherever they go. Also, Stadia will let the gamers jump into a game which they might be following on YouTube. It comes with own controller, which has a dedicated Google Assistant button. Google’s Stadia will be a competition to Apple Arcade, once it will be available. Pricing and availability are not announced so far.

Google Home Line is now rebranded as Google Nest Umbrella. Google Announced a new product for the line, Nest Hub Max which will cost $229. The device is a combination of the Google Home Max, Nest camera, and Google Home Hub.

What Does It Offer?

The Nest Hub Max comes with a 10-inch display, smart display, security camera, front-facing camera and loudspeakers all in one gadget. Isn’t it crazy?  With front facing the camera, you can make Google Duo video calls.  It is smart enough to recognize the person who walks by and then will display the right information such as calendars, and notifications.

If anyone who is not recognized by the device walks by, when you are not at home, then it sends an alert.

It is different from Google Home as it comes with an inbuilt camera. With camera comes facial recognition, which provides customized results between family members The Nest Hub Max will arrive later this summer.

Last year, Google Lens got some interesting updates such as recognizing the information from a piece of paper. This year, it gets more fascinating, now Google Lens can even search for exact dishes on a menu and show the photos of the dish on the basis of Google Maps information to display how the dish looks like. 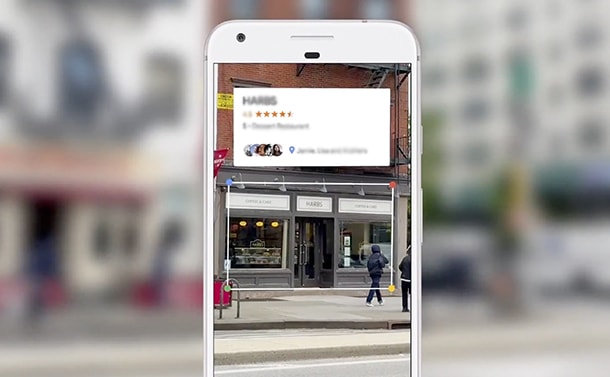 5 Awesome Things To Try on Google LensGoogle Lens is the only application right now which can be termed as the “Future of Image Search”. Here are...

Google has always been accused of storing and using data for ads, this time Google is showed it actually cares about privacy. It has tried to minimize location and search tracking, Google Maps will now come with Incognito Mode, so now your searches will be private. The feature will be available for both web and app.

Duplex Is Coming To The Web

You can now use Google Duplex to bring up information and navigate the web to book movie tickets and more. Rather than confirming a booking for you, users can browse auto-filled forms to verify what Duplex has written before proceeding.

All this is about Google Assistant getting intelligent by the day. You can send messages, reply to emails and send photos to friend swiftly.

Well, this is it! This is all Google I/O had in store this year. We will update you with the arrivals of the updates and products. We hope you like this article. If yes, then please subscribe to our posts.