This fall not just your iPhone, but your iPad is getting an all new makeover too with iOS 12! Apart from basic iOS 12 features your iPad will be getting a few more changes and packs a ton of new features that’ll leave you surprised. iOS 12 is not all about a revamped design but also aims to make your apps faster and more responsive.

From group Facetime calls, Siri improvements, new Control Center—just to name a few! So, without wasting any further minute let’s explore new iPad features on iOS 12 that are coming to our devices this fall.

This is one thing that you’ll immediately notice once you update your iPad to iOS 12 version. The status bar now gets a new look on iPad as you’ll notice that placement of Wifi, battery icons etc. now gets a bit different. Now you’ll just have date and time on the left side of status bar whereas the right side will include icons for battery, Wifi, DND, cellular network status and so on.

With iOS 12, multitasking on iPad gets a lot better! A long bottom swipe from screen will pull out multitasking window where you can see all active apps. And if you wish to view the app dock a usual bottom swipe would do the trick. However, there one’s thing which is quite hard to believe. Multitasking view won’t have control center which is sort of a bummer for most users. But let’s wait till the final iOS 12 version rolls out. Maybe Apple takes care of this issue beforehand. (Fingers crossed)

Well, here comes an explanation! The reason why control center is missing from multitasking view is because of the fact that with iOS 12 you can access control center by swiping from top right corner of screen, just like you do on iPhone X.

Apple has finally (a sigh of relief) added the voice memos app on iPad with iOS 12. For those of you who’re not aware Voice memos is an amazing application with features like trimming audio clips, replacing audio, recovering an old audio clip, iCloud sync across other iOS devices and more. 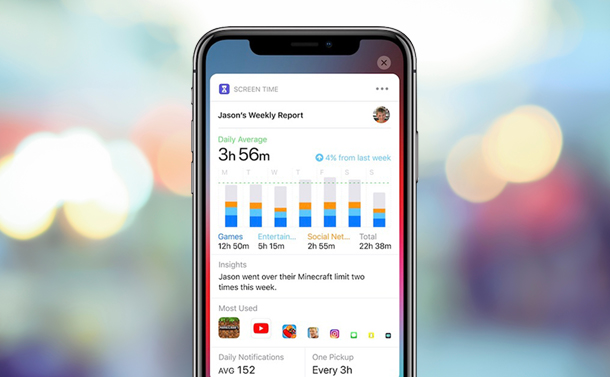 How To Use Parental Control On iOS 12Looks like parent’s prayers have been answered with iOS 12 as it brings better control of kids’ screen time and...

Another wild card entry to join the iOS 12 party is the Stocks app for iPad. With iOS 12 you’ll see an all new redesigned Stocks app which includes news and information about companies you keep tabs on. This new news information is obviously collected by Apple’s default News app.

This is an exclusive iPad specific feature which we’ll see on our devices after upgrading iOS 12. You’ll now see a new ink picker especially while working with Apple pencil, which allows you to adjust width, opacity and color of pencil.

With iOS 12 Siri will become a lot more proactive. It’ll offer your suggestions like ordering your morning coffee, enabling DND while you’re going for a movie, texting your friends or family if you’re running late due to traffic and so on. Not just this, Siri also gets a new shortcut app which allows you to access all your automations with full background access.

These were a few new iPad features that are soon coming to our devices along with iOS 12 upgrade. How excited are you for iOS 12? Feel free to drop your feedback or share your thoughts in the comments box below. 2018 surely seems like a good year, isn’t it?

Tags: ios 12
What Do You Think?
Responses