Friday Essentials Top 10
Technology has been a major aid to filmmaking, character design, production design, makeup, prosthetics, and almost all the aspects of a movie making process. Throughout the history of cinema, technology has made films more real, connecting, and diversified in all sorts of manner. It has allowed filmmakers to explore out of the world stories and present it with unique aesthetics to the worldwide audiences and set a benchmark in their specific areas of expertise. That said, let’s look at the top 10 modern-day technological trends, that is changing the way we watch films.

MoCap is the most prolific of the tech used in modern-day filmmaking. One may wonder how the likes of impossible scenarios such as space sequences, alien wars, and superheroes flying all seem to real. MoCap is the answer to all of that. Traditionally, a complex set added with long hours of makeup and prosthetics (just like in Planet of the Apes) were used to make things like these possible. But MoCap has completely changed its course. In MoCAP, the movements of the human actor or presenter are recorded on the camera, while simultaneously recording every camera angle on an integrated computer screen. Once the movements are captured per the requirement of the scene, superimposed animations and computer-generated are superimposed on the recorded movements. This way, real-time character designs are created with body-mapping the animations on the live movements, leaving no space for errors or break.

CGI is a representation of motion capture technique. While motion capture is done to make sure that the character movements, gestures, and expressions look realistic on-screen, CGI is done for giving a high-quality animation, without involving a human actor and only using him/her character voices. CGI helps in creating realistic scenery and landscapes, alongside helping create a virtual set location. Apart from landscapes and stills, the CGI technique is also used in creating live-action animations and virtual prosthetics with sometimes adding actors’ face-likeness to the animation using special effects tools.

7 Best Video Editor Software For WindowsVideo editing has become a cakewalk ever since the digital revolution took place. Read this article to find the best...

Ever wondered how giant creatures and alien prosthetics are created? 3D Printing is the technique that makes it all special and possible. So basically, 3D printers uses metal powders or thermoplastic materials instead of ink cartridges. The cartridge material is layered and bonded together using adhesive agents in the required shape and size as of the drafted drawing. This helps in creating realistic prosthetics, face masks, sculptures, and alien-like creatures in the films. The best of the 3D-printed characters are dinosaurs in Jurassic World, stormtroopers costume in Star Wars, the famous Iron Man suit, and a lot more.

IMAX is the latest developed filmmaking technique, that uses high-resolution cameras, film formats, projectors to shoot or record a sequence. The standard size of IMAX films is usually ten times the regular 35mm film stock, offering a more wide and high-resolution visual quality. As for sound, the IMAX films use a separate magnetic film to record sound, which allows the filmmakers to create an immersive soundscape for viewers’ theatre experiences. Due to these differences, IMAX film formats require a different theatre setup to play the film, which has a wider screen and a prolific sound system. The IMAX has been heavily promoted by filmmakers like James Cameron and Christopher Nolan, deemed as a revolutionary tech in filmmaking.

Drone sequences are now a common thing in filmmaking. Earlier, a wide shot of a location or set from above was next to impossible task and was either captured from hot air balloons or chopper rides. However, drones have allowed filmmakers to take such shots with higher precision and accuracy. Moreover, drones’ goggles allow cinematographers to look directly through the drone camera and get a perfect visionary shot for the film.

Auditory illusions are audio counterparts of optical or visual illusions. The human ears can hear a sound of a specific pitch and at a moment the ascension of that pitch is saturated, making you hear a similar sound after that without any change. However, in films we all have noticed that the pitch of various background scores goes on and on to give an immersive experience in intensifying sequences. This type of illusion is known as Shepard Tone. Here a number of tones are layered together, and their pitches are looped together to produce a continuously ascending tone. In case you haven’t noticed it, imagine the spooky soundtrack of horror films, intensifying tensions in various scenes of Inception or Dunkirk, or the clock-ticking sounds heard in many films. 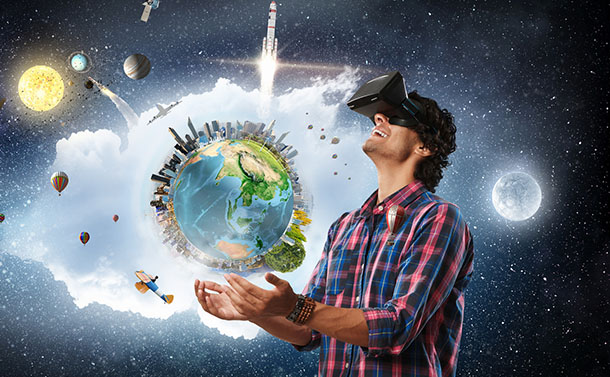 10 Best Virtual Reality Headsets in 2020 |...Confused about which upcoming VR Headset to buy? The concept of virtual reality headsets has come a long way, undoubtedly...

The digital cinematography makes use of digital projectors and cameras instead of traditional reel films to shoot a film. These cameras are said to be much easier to operate and offer a better insight into details of shot to the cinematography. The digital cameras also are more flexible to operate in hand and in motion sequences. A lot many cinematographers are adopting ideas from motion cinematography instead of using rail-lines to move a camera. Moreover, allowing for a better storage, it comes really handy in the distribution and preservation of the films.

A friend of animation designs, MoCap, and CGI, chroma keying is the thing that ,makes all VFX and visual effects sequences, MoCap performances, and CGI animations successful. While MoCap requires an human actor to perform and superimpose the designed animations, there is also required a background to superimpose the animations of surrounding environment on screen. It basically helps in virtual production design and make sets that are nearly impossible to make in real life. Chroma keying techniques helps in creating locations, landscapes, and arenas that are too costly or complex to design. A chroma screen also allows to conduct live photography for certain landscape shots, similar to the shots of heavy storm and disasters, as shown in the films 2012 and Titanic.

Ever wondered how a movie set can resemble a never-ending surface of a moon. How can one create castles and giant spaceships to shoot a 5-minute sequence? One does not create such things, but delusions the audiences in believing it. All these locations and objects are basically miniature versions of what we see in-movie. They are basically a size of small wooden doll houses. An ocean we see in a film is basically a small pond made on the set. This is called miniature effect. The director’s vision and knowledge of art allows him to shoot these miniatures in a manner that they resemble figures of actual size on screen.

Yes, it’s not a  new technology. But this is what the entire film industry runs on. The traditional film stocks. Despite digital cinematography, the reel stocks are constantly going under upgrades in quality and are still preferred by most legendary filmmakers of the industry. It is believed that shooting a movie on traditional film stock offers a realistic approach to the sequences and is still a better technique to take longer shots. The digital film formats undergo extensive heating in prolonged sequences and thus, can be subjected to more noise. However, such is not the case in film, and therefore, the noise does not exceed a saturation limit in shooting longer takes. The debate for film vs. digital rages on, but only time will tell, which one would take over the industry preferences.