Let’s take a look at the highlights of the events that took place on the first day of WWDC.

This year, tvOS becomes more personal with a revamped home screen and full-screen preview of your best TV shows and latest movies. Even your Up next and Recommendations list is more personalized to maximize your viewing experience.

Even though adding family members is already available with Apple TV, but with tvOS 13, switching between users is easy. It can be done from the new Control Centre.

Tim Cook also announced that now Apple TV is extending support to the best controllers in the industry which are PlayStation 4 and Xbox One. These controllers will work with Apple Arcade, eliminating the need to buy a tvOS controller if you already have PlayStation 4 or Xbox One.

Apple TV’s Music app you can get real-time lyrics, in sync with your music, just like Spotify.

Apple watch is getting a new version of OS, i.e. watchOS6 by the end of this year. The software upgrade comes with the App Store on your wrist. Now you can browse the apps and directly install them on Apple Watch. Also, these independent apps don’t require a companion on your iPhone or iPad. This will free up space on your iPhone and eliminate the need of having the same app on two devices.

Apple apps such as calculator, Apple books, voice memos are always coming to Apple Watch. This will allow you to make voice notes, listen to audiobooks, and other things by just using your Apple Watch.

New watch faces including Solar Dial, Modular Compact, Gradient California, and Numerals face are added. Another feature added called taptic chimes. This will quietly tap your wrist every hour on the hour that will help keep track of your time and you will hear a chime if the sound is on.

Moreover, with watchOS 6, a new streaming audio API is arriving. This will stream audio directly away from your iPhone. It has added a couple of significant health-related features such as Noise app, Activity Trends and Cycle tracking.

Noise app is a way to detect the volume level in a room so that you can track if the decibel levels are getting too high. This focuses on indicating if the volume to which you are exposed could pose a risk to your hearing abilities.

Activity Trends can keep track of your fitness data. It compares your 3 months data with the last 365 days. Cycle Tracking will help women track their menstrual cycle, right on your Apple Watch.

As Apple wanted women without Apple watch getting benefitted by the app. Hence, Cycle Tracking is not limited to Apple Watch and is also available on the iPhone Health app. 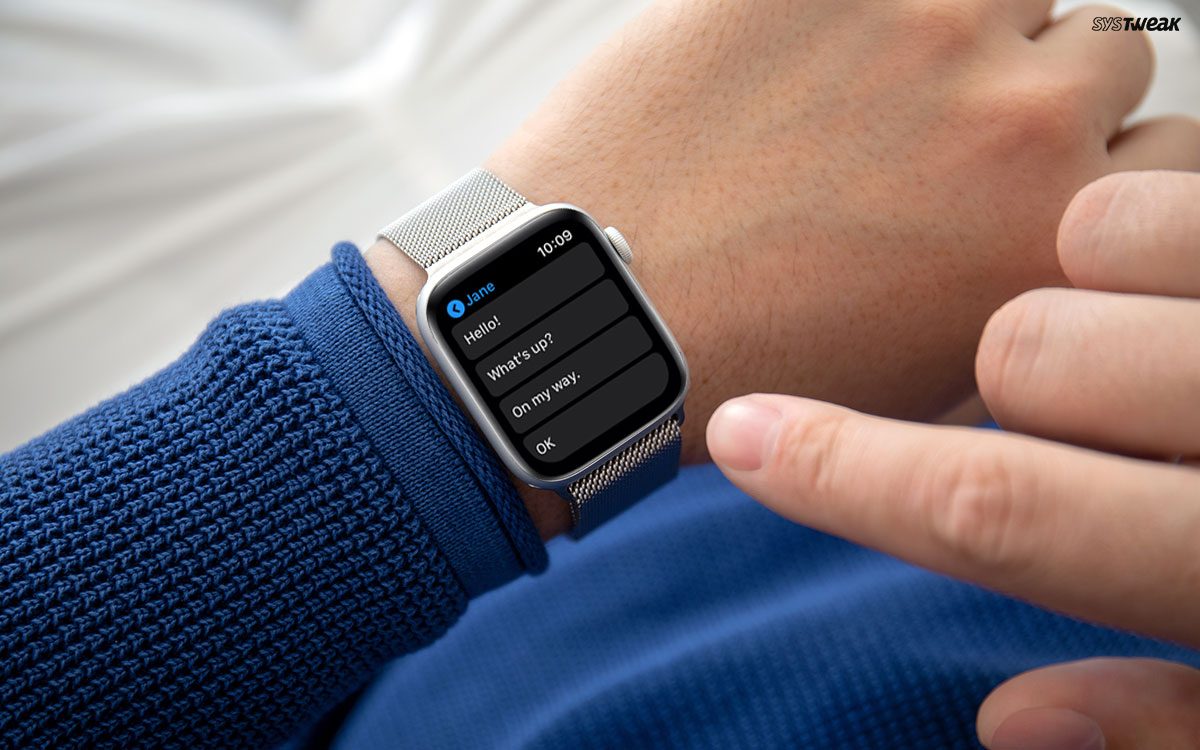 How To Create Your Own Message Reponses For...Want to know how to create your own text replies on the Apple Watch. If yes, then check out how...

Dark mode replaces the light screen with a dark one and will come to native iOS apps such as Notes, Calendar, Music, Photos and more.

Apple has also added Quick Path typing. It is fast and accurate and will be helpful in one-handed typing.

Photos app is revamped, and you can sort photos according to years, days, and months. You can now sort duplicate photos and highlight good shots with the new Photos tab.

Editing tools is easy with a new feature to adjust images by tapping and dragging with your finger.  It allows you to rotate a video, in case you have captured it in the wrong orientation.

Find my Phone and Find My Friends is now called Find My, which helps you to locate your missing devices even when offline using a Bluetooth beacon.

If a website asks for your Google mail or other social media accounts to continue, Apple’s new privacy feature saves you from it. With Sign in With Apple, you can log into accounts and apps without using your email address. This will protect you from websites tracking your private data. All you need to do is authenticate it with Face ID.

Now Siri can read messages for you as soon as they arrive and gives you an option to respond instantly.

Messages app now supports Memoji profiles, which places a thumbnail of your memoji (an emoji of your face) in the Messages app.

iOS 13 is just for the iPhone, Apple will introduce new OS, iPadOS for iPad.

Apple has come up with different operating system for iPad, i.e. iPadOS.  On iPad, you can get widgets and apps on the same screen to gain more control over the apps and widgets.

It also allows multiple window capability to apps. For example, with this feature, you can open two notes side by side, just as we do in Windows by pressing Shift+Windows and Right/Left keys.

This is a high-end computer which comes with up to 28 core Intel Xeon, 6 memory channels of ECC memory and, 12 DIMM slots. It comes with up to 1.5 TB system memory. It also has eight internal PCI slot. The IO card has Thunderbolt 3 ports, two USB-A port, and 3.5 mm audio minijack.  It has 32 GB RAM, 256GB SSD along with Radeon Pro 580X graphics card

Pro display XDR is 32-inch LCD with over 20 million pixels with 6,016×3,384 resolution. It has a 6K retina display.  It incorporates a polarizer for better viewing angles.

The new MacOS is named as Catalina. iTunes has been split up in three apps, Podcast app, Apple Music and Apple TV.  With Sidecar app, you can use an iPad as a second display. With Project Catalyst, now developers can port their iPad apps to MacOS.

So, these were the announcements made by Apple on the first day of WWDC 2019.

What do you think about the announcements? Please share your thoughts in the comments below.